Past history of the Media Room

The Media Room was formed in the year 2004 during the tenure of Al Hajj Anver Dharamsi (President of KSIJ Dar es Salaam).
This project was under the Project and Development Committee.

Since its inception, it has been relaying powerpoint presentations of duas, amaals and others and relaying of video and audio for majalis, duas and other programmes using state-of-the-art equipments and with dedicated volunteers. The community members have very much appreciated the services given by the mediaroom.

The Media Room is located in between the ground and first floor of the Gents Masjid.

From 2012, a new committee was formed under the leadership of Br. Muzaffer H. Lalji 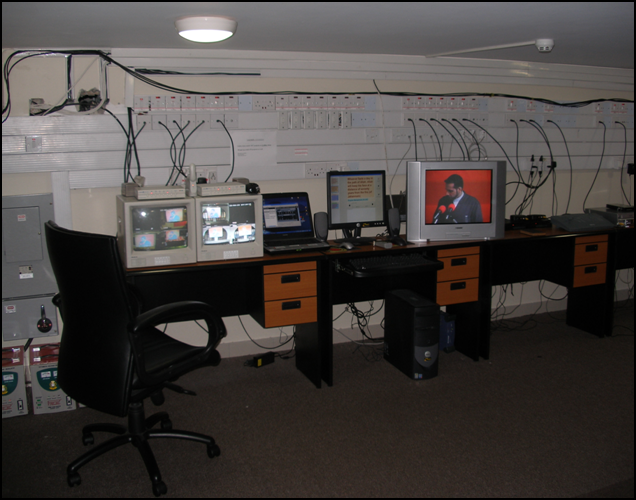 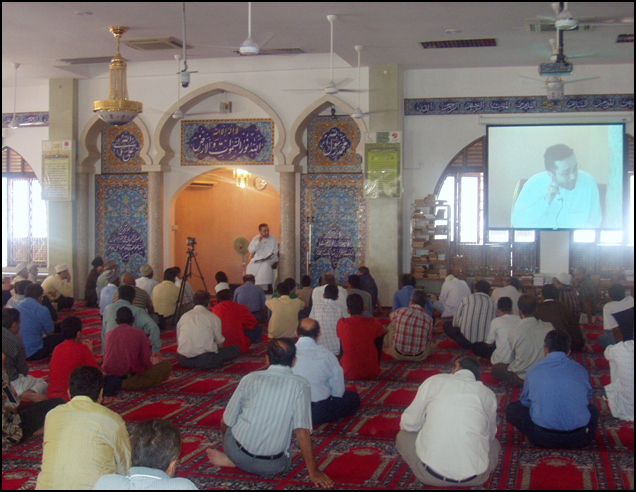 From October 2010 to 2012, a new committee was formed under the leadership of Br. Aqeel Khaki. 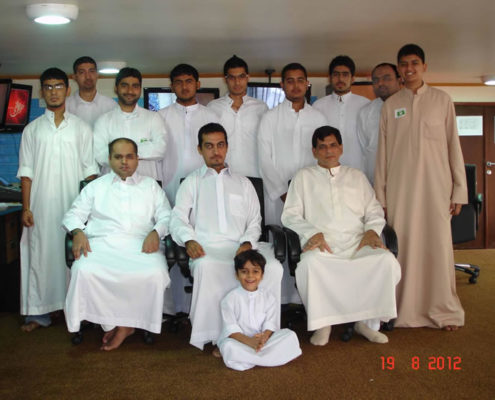 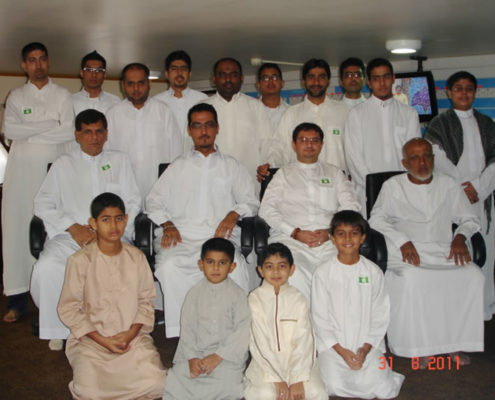 From August 2008 to 2010, the committee was formed under the leadership of Murtaza H. Lalji.

How Instant Visual Translations were introduced in Dar es Salaam

Instant visual translations were introduced in Dar es Salaam Masjid and Imambargah by the Tabligh Studio in the year 2000. At that time, the studio was located above the Husseini Video Library / Tabligh offices.

In 2004, the jamaat decided to shift the media room to a convenient location above the masjid and state of the art equipments were introduced. As opposed to TV’s used before, the new facilities included large screens, powerpoint and a state-of-the-art mediaroom with latest equipments to control all screens and projectors without the need of switching them on manually in each section.

With this, a new committee was appointed to handle the mediaroom

For the past many years preachers, academicians, religious scholars, writers and Madrassah teachers have been emphasising to the community at large that supplication to Allah (s.w.t.) should not be by way of recitation without understanding the meaning and reasoning of what one recites.

Following such discourses and discussions, useful translations have since been published while for the computer literate a fair number of audio and video CDs have been made available with clear recitation and explicit translations of duas and prayers.

For surfers on the World Wide Web a fair number of web sites now provide ready translations of almost all the main duas that are recited during important occasions. 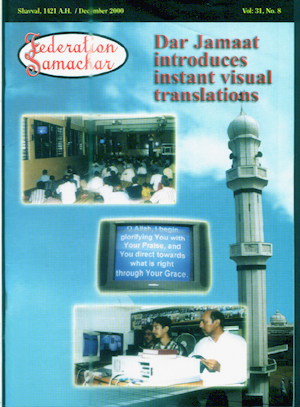 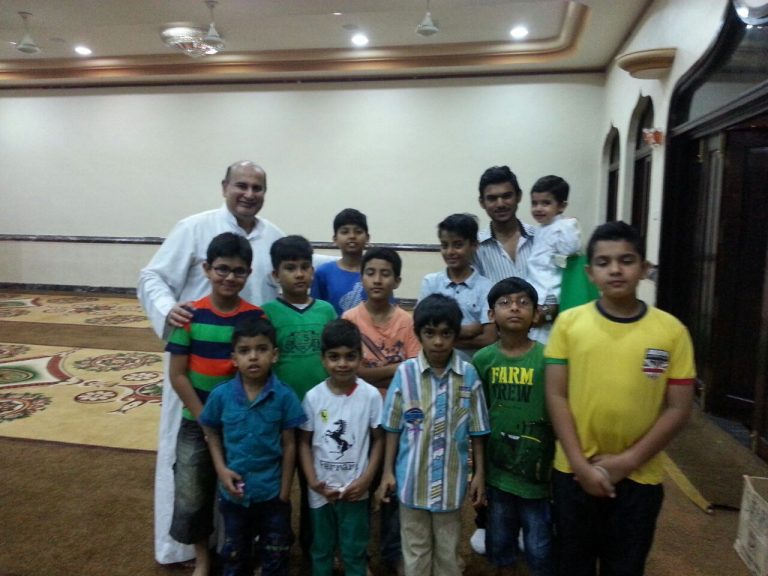 Despite all this there was still a snag.
During the holy month of Ramadhan it is highly recommended to visit the Mosque for duas which is why many attend the Mosque for Dua-e-Iftitah even if this means listening to the duas without understanding.

To alleviate the plight of our brothers and sisters, the Tabligh Sub-Committee for the first time in the history of Dar-es-Salaam Jamaat and probably for the first time in Africa this year, during the Holy Month of Ramadhan, initiated a very useful translation facility by way of televisions in the Imambarahs.

After witnessing how the computer oriented translation system of duas worked during the last holy month of Ramadhan in Stanmore and Mehfile Ali in London, coordinator, Abdul Datoo who is also part of the Tabligh set-up in Dar es salaam was keen to have the instant translation system implemented in Dar es Salaam.

He observed and learnt the way the same procedure was implemented in London and in Canada and then brought the system to Dar es Salaam . This system has been installed in the Tabligh Studio that is located above the Husseini Video Library opposite the mosque.

Came Ramadhan this year and members of the community were given a pleasant surprise with the instant translations on so many television screens. The community has been full of appreciation of the translations of the duas that are recited each night. The advantage of the existent translation system is that it can be adapted to any other programme. For instance Gujarati lectures can be immediately translated through the same system.

The system operates with the involvement of two to three committed persons who need to control the studio by changing the translation paragraphs to match what is recited.

The requirements are a Video Camera, a computer,TVs and videos to control,a Video Card (to transfer data from the computer to the television. This costs about Sterling pounds 80 only) while televisions need to be installed for viewers. The Camera is installed in the Gents Imambara and is controlled by the Tabligh Studio which controls the Zoom, Wide angle and can rotate at 360 degrees thereby making it adaptable for use to record other important functions like the Graduation and Prize Giving Ceremonies of the Madressa and others.

Similarly different positions can be set to record lectures, presentations and Nikah ceremonies. The Camera is and will be used to record every important occassions like Khushali, Wafat & Nikah Ceremonies. The cassettes of such functions can be bought or obtained from the Tabligh Corner located in the Mosque.

When asked about what egged him to instal the new system in Dar es Salaam, Abdul Datoo said, “the translation project is aimed at making listeners aware of what they are listening or what they are reading from the Arabic text.”

He added, “many of us recite duas but don’t understand. This facility makes an interested person read in English while a Dua is being recited .” The duas which have been included for Ramadhan are Dua-e-Iftitah, Dua-e-Kumail and Dua-e-Tawassul. Amaals have also been included.

The Ladies have very much appreciated this new facility. They have televisions on the first and ground floors and they can also see the Majalis/Lectures on their television screens. Future plans intend to put a camera in the Mosque so that Friday prayers Khutba and other lectures are recorded and viewed on television for those unable to see the Imam.

To use the Tabligh studio for other months like Muharram.

To put a direct, live connection through the tabligh website so that it can be viewed on the web world-wide.

Digitalizing of Audio cassettes and subsequently putting them on the website.

Relaying of translations of Dua e Tawassul on Tuesdays and Dua e Kumail and Ziarate Waaritha on Thursdays.

Relaying of programmes at Mehfile Abbas(a.s.) – Mediaroom has also facilities of cameras, projectors and screens there and controlled independetely.

Presentations of Duas and Amaals during Muharram, Ramadhan and others months.

Co-ordinating with other jamaats to setup presentations by providing them duas and amaals CDs. For example, We initiated and setup the presentations in Moshi Jamaat through one of our members, Muhammad Shaban and we also donated a screen for them.

Video transmission to Mosque and Imambargah during various programmes of various jamaat sections like CHB, IULS and others.

Co-ordinating with IBN for live transmission for some programmes.

How is the instant visual relaying is done?

The mediaroom operates with the involvement of two to three committed persons who need to control the mediaroom by changing the translation paragraphs to match what is recited. 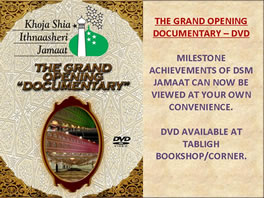 The Mediaroom was covered in the Grand Openining Documentary DVD

How Arabic was introduced in the translations?

Initially, the translations were in english only and this was making it difficult for the operators to show what is in the screen to what is being recited. One of their members, Muhammad Shaban got this idea of having arabic together with the english translations and he found out some of such powerpoint presentations from the web while others were provided by Abdul Datoo and while others were made by Media Room team themselves.

Ever remembered an Arabic word from the Holy Qur’an, but didn’t know exactly where? Enter the word and select Transliteration. Hit ‘Search’, and you shall be amazed!

Kindly us the enquiry form on the right side for any questions, suggestions or comments.